Today, we live in a society organized mainly around capitalism. Not only are making money and, to some extents, having a career objectives that guide many people’s lives, but prestige, status, and social identity also are typically measured within a capitalistic mindset. Even when corporations claim that “people come first,” they refer to their employees’ skills and experiences as “human capital” or “cultural capital.” Everything we do has monetary value attached to it.

According to the philosopher Byung-Chul Han, this tendency is part of today’s achievement society, which can be seen starkly in digital communication, including social media, changing us from citizens to consumers. Han’s latest book, In The Swarm, is a wakeup call to action, declaring that it’s time for citizens to care more about society’s welfare than their own egos. “Responsibility for the community defines citizens. Consumers lack responsibility, above all,” he writes.

Han was born in Seoul in 1959. He studied metallurgy in Korea before moving to Germany in his early 20s to study philosophy, German, and theology. Today, Han is a professor at the University der Künste in Berlin. His initial fame sprang up mainly after publication of his book Mudigkeitsgesellschaft, which, directly translated, means “the fatigue society.” However, in English, this was cleverly translated to The Burnout Society. He is the author of more than 20 books, which have been translated into many languages and are well-read among socially and philosophically aware readers.

Han’s philosophy dovetails with French philosopher Gilles Deleuze’s idea about seeing our current achievement society as a “control society.” Unlike Michel Foucault’s disciplinary society, in which people know that their freedom is limited, people in a control society actually–and very falsely–believe that they are free. It’s a shift from disciplining the body to controlling the mind in a seductive way. The consequence is that people tend to exploit themselves aggressively until they burn out, collapse, or suffer from depression. Usually “exploitation” entails someone being exploited by someone else, Han claims that we actually do it to ourselves. “The crisis we are now experiencing follows from our blindness and stupefaction,” Han writes in In The Swarm. By “crisis,” he refers to at least two things: First our democratic crisis caused by the shallowness of digital communication, social media, information overload, etc., which he says undermines critical thinking, respect, trust, etc. Second the consequences it has on a personal level cf. stress, depression, burnout, suicides, etc.

Han is part of a growing number of sociologists and philosophers who conduct social analyses. Similar ideas can be found elsewhere among theorist related to the Frankfurter school, but also among other critical psychologist, spiritual teachers and so forth. Some of these ideas are how a too-rigid positivity is destructive, especially when it comes to self-development; how technology makes everything accelerate; and how we are always at work. Still, Han contributes to this debate not so much by adding new idea, but by presenting clearer, almost poetic descriptions of what’s going on. His books advance the idea that philosophy is for everyone. His postulating and concrete style always forces the reader to reflect, to wit: “Digital devices have mobilized work itself. The workplace is turning into a portable labor camp from (which) there is no escape.” Do we live in a labor camp?

He also asserts that freedom has become a constraint. “Exhausted achievement-subject(s) can rest only in the same way that a leg falls asleep.”

Han’s main claim is that today’s neoliberal psycho-political power appears to be invisible and imperceptible unless we pay very careful attention. But–and this is the problem–we rarely pay attention because that which works as an invisible or imperceptible power is also what prevents us frompaying attention, e.g., Twitter and Facebook. Therefore, a traditional critique of capitalism is not sufficient. The point really is that we must understand that our daily lives and our ideas about freedom have become nothing but cogs in the machinery of capitalism.

One of the reasons for this is that a digital culture is based on counting. “In contrast, history means recounting.” On Twitter or Facebook, one counts followers, likes, retweets, or friends, whereas real friendship, Han says, “is an account, a narrative.” Digital culture is also tied to the mantra of transparency found in modern political and corporate-governance literature, which only diminishes trust while monitoring and controlling every click we make online.

“Transparency is ruled by presence and the present tense,” Han claims. However, to think, we need distance — physical and mental — that is what constitutes the public sphere. It is from distance that we learn to respect, reflect, and analyze. “A society without respect, without the pathos of distance, paves the way for the society of scandal.” Still, some may ask, couldn’t we use these same media outlets — YouTube, Twitter, Facebook, etc., — to activate a critical awareness, bringing academia out of the ivory tower and into the broader society?

Two guiding concepts work as analytical tools for Han in all his books: freedom and power.

Freedom, according to Han, is both a problem and a possibility. It is becoming, as Deleuze would say, emphasizing that we become by combining courage to stand up against dominating ideals and norms with the belief that things could be different. Freedom is becoming whatever, i.e., in some way disobeying power. Real freedom is socially anchored, as he says in Psychopolitics. “Freedom is a synonym for the community that succeeds.”

But today, we are not free, Han claims in In The Swarm: “Information fatigue includes symptoms that characterize depression. Above all, depression is a narcissistic malady,” he writes. We, or many of us, only hear the echoes of ourselves, for example, when we cry with joy when strangers follow us on Twitter, or when our tweets are retweeted. At the same time, this freedom to constantly polish and refine social profiles–and gain more “cultural capital” while others comment, like, or retweet–creates more pressure. “As such, it marks the end of freedom…The achievement subject exploits itself until it collapses.”

Although there is a tendency toward redundancy in Han’s many books, his critiques of concepts such as freedom, power, control, and transparency are highly relevant.

In In The Swarm, however, one might detect something old-fashioned in Han’s philosophy–or perhaps even wrong–in some of his claims. For example, he writes “the mass is power” because it shares an ideology, whereas the digital swarm is narcissistic and is not unified. “They do not march.” This, of course, is wrong. After the election of U.S. President Donald Trump, one of the most encouraging things has been how people marched in the streets. First, there was the women’s march in January, then marches this month against recent white-supremacist activity in Charlottesville. Furthermore, do we really need a new ideology against the online swarm to overcome another (i.e., capitalism)?

Han operates with a romantic ideal about authenticity and truth, yet perhaps we just need to push the underlying idea of the Internet further. Allow it to have no roots, no control, no editing. Instead, view it as a rhizome that grows horizontally without a beginning or end. Pure becoming. When nothing is given, one is free to harmonize his or her life with reality, to change according to the rhythms of existence–no longer caring whether what he or she is doing would fit into a neoliberal mindset.

Critical voices might say that the downsides of neoliberalism—and especially of the Internet–that Han discusses have been explored before. However, Han focuses on something else. Basically, he not only raises questions regarding the condition of our current society, but also asserts that the real problem is that we don’t raise such questions. He is part of a growing choir claiming that many of us are becoming the kind of easily malleable citizens that totalitarian dictators dream about.

Han’s philosophical encourages us to think, and I view that as a good enough reason to read his books.

Or my essay, Which dish of noodles are your life worth?

Or my review of, Saving beauty. 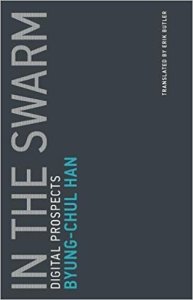 PhD, a writer and a philosopher. View all posts by Finn Janning

Finn Janning, PhD, is a writer and philosopher.

His works has been featured in Epiphany, Under the Gum Tree, and Foliate Oak Literary Magazine. His most recent books are Stakkels Jim and A Philosophy of Mindfulness.

Your donation allows me to continue to provide philosophical teaching and writings.