In recent years, there has been a growing interest in Buddhism and mindfulness meditation as well as some new-age philosophies that are often nothing more than pale imitations of Buddhist techniques. The interest is obvious. We live in an achievement-orientated, performance based culture and we are constantly forced, and even force ourselves to do something, and to set new goals and so forth. The result is that we become less aware and experience more narcissism, stress and depression.

Meditation can in other words, help us to become more mindful. “Mindfulness is the true refuge of the mind, mindfulness is manifested as protection, and there is no exerting or restraining of the mind without mindfulness.”

After I finished reading this book I didn’t know whether I should be impressed by or doubtful of all those people who claim to be mindful, because it requires diligence and self-control. It’s certainly hard work.

For those who are interested in Buddhism it can — especially for newcomers — be difficult to separate the wheat from the chaff (such as much of New Age thinking). As Shaw stresses, “a good tradition, teacher and friends, along with text, are the best ways of finding out about meditation for oneself.” Shaw is a knowledgeable teacher and a caring friend.

She deals solely with the Buddhist tradition, although that doesn’t mean that she is critical towards the important contribution to mindfulness made by Jon Kabat-Zinn and others, it is simply that her focus lies elsewhere. Shaw wants to show us how the texts have always been an important part of sharing Buddhist practices. In addition, she attempts to illustrate that Buddhism compared to other religions is less dogmatic. Rather it consists of good advice that comes from experience, or to put it differently: if one wants to wake up, then it is not enough to believe, one must act, and for example, meditate.

The Spirit of Buddhist Meditation can, therefore, be viewed as a rich introduction to the multiplicity of Buddhism, but also — and perhaps more likely — as a thorough guide for the more experienced meditators, or those who are already familiar with the philosophy of Buddhism. The book is littered with illuminating phrases, such as “What is required is that we try to live here and now ‘in our bodies'” — “You breathe in and out all day and night, but you are never mindful of it, you never for a second concentrate your mind on it. Now you are going to do just this” — “if we cannot control our minds, it will be impossible to control our actions and speech.”

A wide range of Buddhist writings on meditation are investigated and those already familiar with reading original Buddhist texts will appreciate the mixture of anecdotes, practical tips and endless repetitions within the same text. Sometimes this repetition can become a little boring unless, of course, one really pays attention to the minor differences that the text unfolds. Perhaps, the texts are written like that on purpose to cultivate our awareness.

Another reason for the repetition is that many of the texts come from an oral culture where the teacher would chant aloud. This of course explains why the reading can, at times, be a challenge. It is like listening to a love song on the stereo. Without the instruments, the rhythm and pauses, the experience can often seem more flat.

The Spirit of Buddhist Meditation explains the eight fold path of meditation, how meditation is practiced (sitting, standing, walking) and provides instructions on how to breathe, explaining why breathing is the foundation of a spiritual practice. (I may add that the word spirit comes from the Latin spiritus, which is a translation of the Greek pneuma, meaning breath). We also learn why there is no sane reason for clinging on to anything. The goal of Buddhism is to release one from the cycle of existence (Nibbána) and here the meditator enters a sphere of nothingness where, if you believe it, birth is caused by death. However, if you don’t believe in reincarnation, and I am skeptical; then you can still be open-minded and admit that we do not know for sure what happens when we die. For most meditators though, the experience of death may be beyond reach unless a life lived in retreats is desired. Despite this, with some practice and guidance it may be possible to experience that “space is infinite”, even though this concept can make most people feel dizzy thinking about it. If this is possible, then we may also understand that “consciousness is infinite.”

Everything is interconnected but this is not only a Buddhist idea as it can also be found in ecological thinking, or in the works of Spinoza or Deleuze. We may cultivate an experience through meditations. Again, the point of Shaw’s study is not the engage with other philosophies or psychological traditions, but to show the richness within the Buddhist tradition.

The Spirit of Buddhist Meditation will most likely attract people who already meditate, or those who would like to do so. However, it can also serve as a useful introduction to Buddhism in general, as well as act as an inspiration for people who work in the growing service industry, helping people recover from the negative effects of modern day capitalism. 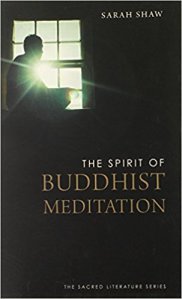