The Nihilist: A Philosophical Novel was written by John Marmysz, who—like the story’s narrator—is a philosophy teacher at a college.

The narrator is a nihilist, explaining that, “The thought that I will at one point no longer be here, that I will evaporate into nothingness never again to exist, drives me to nihilism. This one fact of death makes everything else in life meaningless.”

For a great part of the novel, death is the centerpiece—either as the concrete death of a mother, friends, or colleagues, or as constant reminders of the narrator’s own impending death and those of the loved ones around him.

Does this sound sad? Perhaps, but the novel is rather funny and thoughtful in showing what living as a nihilist is like. An underlying force in the story, as in classical existential literature, is how the narrator refuses to give up even though life is meaningless.

The concept of “nihilism” is often associated with the German philosopher Friedrich Nietzsche, who used it to describe the lack of cultural values in his time. For Nietzsche, nihilism was something to overcome—for example, by producing works of art that bring new existential values and beliefs to the world. Nihilism is not overcome by referring to another transcendent world, but through a will to create. However, the problem is that people tend to cling to old, dying values (e.g., religion). Even though people who take this approach may confront current values (e.g., the happiness industry) and call their bluff, they still feel incapable of doing anything. Nietzsche labeled this tired approach “passive nihilism,” which stands in opposition to “active nihilism,” where one fights back in spite of it all.

The Nihilist succeeds in placing itself in between the passive and active forms of nihilism. Telling the story is, after all, an example of trying to make sense, and philosophy “encourages me to take nothing for granted,” the narrator says.

The route from passive to active is facilitated in a way that makes philosophy therapeutic. The narrator tries to understand and make sense regardless of his inability to do so. Sometimes he just has to accept that the feeling of oneness that he experienced as a young member of a punk band is gone. Sometimes he has to accept that he might violate philosophy’s rebellious callings by striving to earn tenure.

The novel opens with the death of the narrator’s mother. “My mother died when I was well into my 40s.” From there, the story moves back and forward in time, reflecting on various scenes from the professor’s life. There are many deaths: one person is shot, one kills himself, and one becomes so mentally unstable that he dies.

The professor tries to illustrate—and at times convince himself—that philosophy is not separate from life but is a part of it. What can we learn from all this death? Complain about our own deaths, as he suggests. Or, as he also offers, “My point is, when we introduce ourselves to new people, we tell them what sort of work we do for a living instead of telling them that we’re into punk music, or that we’re nihilist or anarchist, or that we fear death.”

So, instead of contributing to the meaningless system of capitalism that measures everything in money, we could be honest and share our experiences of what it means for us to be human beings.

A key figure in the novel is the philosopher Heraclitus, who famously said, “We cannot step into the same river twice.” This old Greek also explained that the world is fire—that is, impermanent. “Life is like fire.” This metaphor of fire returns in several places in novel: when the professor suffers from stomach pain that makes him vomit fire, when he breathes fire during an intense dream, and when he actually catches fire while running. The fire works as an existential guide that illustrates how life affects him. Some examples:

“‘So why did I fail the class?’ the student asked again. I smiled at Marlene again, trying to muster my patience. I also started to feel a burning sensation creep from my stomach up into my esophagus. My heartburn was starting to erupt once again.”

Later, he again experiences this sensation at the dinner celebration for tenured faculty:

“During my argument with the history professor I began to experience that old burning pain in my stomach… Before I was able to stand up and turn around, my mouth filled with stomach acid. The taste and the hot, burning feeling triggered a retching response and I vomited all over.”

The mind and body are connected.

The Nihilist is passionate because the narrator is on fire. Amid the strong influences and passions for philosophy and nihilism, the novel’s strength shines through: we see the narrator’s relationship with life. The professor allows himself to be surprised and even excited by life.

I read The Nihilist as a movement from passive to active nihilism—from philosophy as an abstract exercise to philosophy as a concrete therapeutic practice. It is about the professor becoming a philosopher.

Philosophy is always before us. Gradually, the professor realizes that life might be tragically absurd and meaningless because it raises more questions that he can answer. However, philosophy is “an open-ended process of ongoing questioning.”

The Nihilist ends with a kind of semi-resolution, not a moralizing finale or happy ending (although the narrator finds some comfort in running, but even here he burns). However, the reader may ask whether this burn is life-affirming, since he finally acknowledges that it “is a pointless exercise leading nowhere.”

Isn’t one of life’s beauties that it comes from everywhere, leading each one of us nowhere?

The Nihilist is a rich story that also finds comfort (albeit temporary) in other people. For a while, many of us—though unfortunately not all—have someone we can live with and perhaps even love and share crucial experiences with. For the narrator, this is his college sweetheart Colleen.

And that’s enough. The last thing that the nihilist narrator does? He laughs. 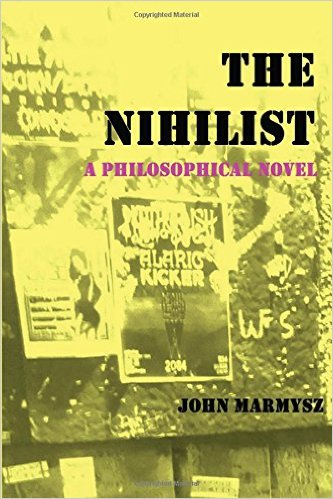